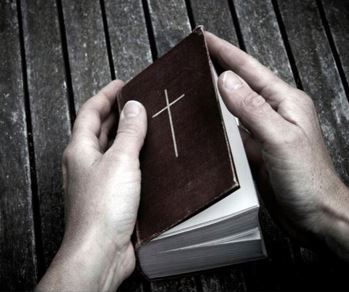 Heb. 4:12 - For the word of God is living and powerful, and sharper than any two-edged sword, piercing even to the division of soul and spirit, and of joints and marrow, and is a discerner of the thoughts and intents of the heart.

"I help people to discover God in the Bible!”

This was Jerry’s answer to a woman on a plane who just told him that she hated Bible-thumpers, asking him: "What do you do?"

For a moment she was lost for words, but then asked, “What does that mean?”

“Well, I can show you if you like,” Jerry said. “Since you are Jewish, I would if you have a favourite passage from the Hebrew Scriptures?”

“I love that passage, too,” Jerry exclaimed.

Because he didn’t want to intimidate her, he didn’t took out his Bible he had in his carry-on bag with him on the aroplane, but rather suggested that they, between the two of them, try to remember enough to piece the Shema passage together and figure it out.

So, for the next few minutes they when back and forth, each adding a phrase of two from the Shema passage until they had pieced it together from memory.

He then asked her, “So, what did you discover about God in this passage?”

With a very thoughtful expression, she then starts discussing the attributes of God’s character revealed in that passage.

After a time, Jerry asked, “and what do you learn about yourself and about human nature in general from the Shema?”

By now, this woman had warmed up to the topic and genuinely engaged, started reflecting on what it meant for her in the 21st century.

Then, Jerry asked the most important question, “So, if all these things in the Shema are true, how would you obey what you have discovered in this passage?”

Hearing this question, made this woman snapped around to face him directly and said very emphatically: “I - don’t - do - obedience!”

Although taken back by the woman’s reaction, the Spirit of God helped Jerry to ask her again: “Well, how would you describe who this Shema should impact your life?”

And to his amazement, she leaned back and then answered, “I think I could respond to the God who created me and has a purpose for me.”

And then she opened up with some honest and private reflections. It was clear that the power of a nearly forgotten Scripture had taken her to a vulnerable place with God - along with her “new friend, the “Bible-thumper”!

To think that within a hour or so, this lady who was making harsh comments about Christians, was now deeply engaged in her own Bible study!

And it had nothing to do with technique; it had everything to do with the power of God’s Word to touch the hearts of people, the moment when they are willing to listen to it, and to start asking themselves questions about what this Bible passage actually meant in their lives.

As the passengers buckled up for the landing, this lady turned to Jerry again and said: “You really do help people discover God in the Bible. This was a very remarkable experience. Thank you.”

What Jerry did was to help this lady to discover that the God of the Bible really speaks to people when they, together with one or two others, read the Bible together and reflect and answer honestly what they hear about God, about themselves as humans, and about how their lives would change if they dare to put it into practice.